When including a figure or a table from another source in your work, it is important to include appropriate citations. Any image used in your assignment requires a caption. If the image is not your own work it also requires an in-text citation to the original source.

Any illustration or image in APA is treated as either a Table or a Figure. The purpose of tables and figures in documents is to enhance your readers’ understanding of the information in the document. Tables are numerical values or text displayed in rows and columns. Figures are other illustrations such as graphs, charts, maps, drawings, photographs etc.

All Tables and Figures must be referred to in the main body of the text and in the reference list. Because tables and figures supplement the text, refer in the text to all tables and figures used and explain what the reader should look for when using the table or figure. All tables and figures in your document should use a similar format, with the results organized in a comparable fashion. Use the same name and scale in all tables, figures, and the text that use the same variable. Each table and figure must be discussed in the text. An informative table will supplement but will not duplicate the text. In the text, discuss only the most important parts of the table. Make sure the table can be understood by itself without the accompanying text; however, it is never independent of the text. There must be a reference in the text to the table.

Number all Tables and Figures sequentially as they first appear in the text.

Refer to them in the text by their number. For example:
As shown in Table 2 …
OR
As illustrated in Figure 3…

Any image that is reproduced from another source also needs to come with copyright permission; it is not enough just to cite the source.

Tables are characterized by a row-column structure.

Data in a table that would require only two or fewer columns and rows should be presented in the text. More complex data is better presented in tabular format.

Each table should be displayed with a clear and concise title. The table title and headings should concisely describe what is contained in the table. Abbreviations that appear in the body of the table can sometimes be explained in the title; however, it may be more appropriate to use a general note.

Each word in the title should be italicized and capitalized except with, of, in, and, etc. The Title is in italics but the Table Number is not. Also note the space between the title and the top of the table.

There must be a caption beneath the table. Use the following format - this format differs from the reference list format.

if you are adapting material from multiple sources - that is, extracting rows or columns from previously published tables and integrating them into a single table - you might need to include multiple permission statements, one for each source.

If you are simply pulling data from multiple sources, rather than repurposing columns or rows from preexisting tables (the data are not subject to copyright, but their presentation is), then it may be appropriate to just include standard author–date text citations within the table. This type of table is often used to summarize the results of multiple studies, which makes it easier for readers to digest the information, and is commonly used in meta-analyses.

(a) to eliminate repetition in the body of the table,

(b) to elaborate on the information contained in a particular cell, or

A general note provides information relating to the table as a whole, including explanations of abbreviations used, symbols, and the like. Included within general notes would be any acknowledgments that a table is reproduced from another source. General notes are designated by the word Note (italicized) followed by a period.

A specific note makes a reference to a specific row, column, or cell of the table and is given a superscript lowercase letter (e.g., a, b, c), beginning with the letter “a”: a n = 50.

Within the headings and table body, order the superscripts from left to right and from top to bottom, starting at the top left.

A probability note is to be included when one or more inferential statistics have been computed and there isn’t a column showing the probability, p. Asterisk(s) indicate the statistical significance of findings presented within the table. Try to be consistent across all tables in a paper. The important thing is to use the fewest asterisks for the largest p value. It is common to use one asterisk for .05 and two for .01. For example:

Notes should be listed with general notes first, then specific notes, and concluded with probability notes, without indentation. They may be single spaced for better presentation. Explain all uses of dashes and parentheses. Abbreviations for technical terms, group names, and those of a similar nature must be explained in a note to the table.

Note. General notes to a table appear here, including definitions of abbreviations.

Figures reproduced in your text

As tables supplement the text, so should each figure. Figures include: maps, graphs, charts, drawings, and photographs, or any other illustration or non-textual depiction in printed or electronic resources.

The APA has determined specifications for the size of figures and the fonts used in them. Figures of one column must be between 2 and 3.25 inches wide (5 to 8.45 cm). Two-column figures must be between 4.25 and 6.875 inches wide (10.6 to 17.5 cm). The height of figures should not exceed the top and bottom margins. The text in a figure should be in a san serif font (such as Helvetica, Arial, or Futura). The font size must be between eight and fourteen point. Use circles and squares to distinguish curves on a line graph (at the same font size as the other labels).

When you use a figure in your paper that has been adapted or copied directly from another source, you need to reference the original source.  This reference appears as a caption underneath the figure that you copied or adapted for your paper.

Any image that is reproduced from another source also needs to come with copyright permission; it is not enough just to cite the source.

Each figure should be displayed with an explanatory title.

You must include a caption beneath the figure. For figures, make sure to include the figure number and a title with a legend and caption. These elements appear below the visual display. For the figure number, type Figure X. Then type the title of the figure in sentence case.

Use the following format - this format differs from the reference list format.

If a table or figure was being reproduced for a published work, permission would need to be sought from the copyright holder and this information included in the caption. For example: Copyright 2014 by the ABC Company.  Reprinted with permission.

Example of Formatting for Tables

Note. Adapted from "Journal of Language and Education, Russia, 1(1), 17-25. Copyright 2015 by the National Research University Higher School of Economics. 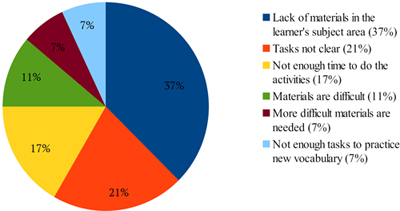 Examples of Formatting for Figures

Figures created by the author:

Information on citing and several of the examples in this guide were drawn from the APA Manual (6th ed.) and the APA Blog Navigating Copyright for Reproduced Images: http://blog.apastyle.org/apastyle/2016/01/navigating-copyright-part-1.html.